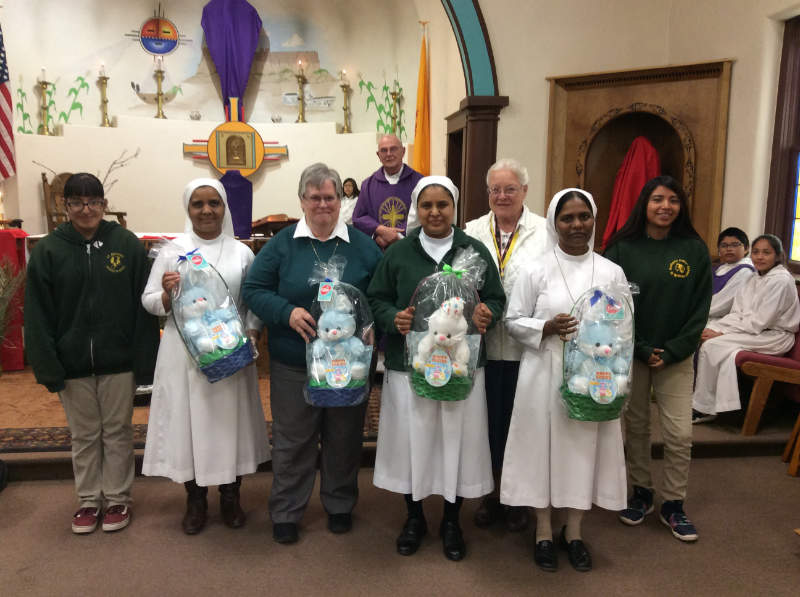 We cross the sacred threshold of Holy Week on Palm Sunday. Yet, we have no palms. How do we welcome our King without our beloved palms? Again we turn to the Gospel for answers.

After raising his beloved friend Lazarus from the dead Jesus joins of group of his fellow Galilean pilgrims on their way to Jerusalem for the Passover which is the feast remembering the deliverance of the Hebrew people from slavery in Egypt. As a faithful Jew all his life on passover Jesus would have walked to Jerusalem and entered the holy city on foot. But now he comes riding on a colt donkey along with its mother (a jenny). Donkeys are very social animals so while training for service donkey herders will never separate young donkey from its mother.

Why does Jesus come into Jerusalem on a colt and its mother?
First, this show his deep maternal love for Jerusalem. One of the Hebrew words for God’s love, mercy and compassion is Racham which comes from the word Rechem which literally means “womb.” Jesus loves Jerusalem with the deep “womb-love” of a mother for its child.

Similarly, Jesus expresses his deep womb-love when he weeps over Jerusalem comparing himself to a mother hen when he says: “How often would I have gathered your children together as a hen gathers her brood under her wings, and you were not willing!” (Matthew 23:37-39).
Second, Jesus comes on a little donkey to show that he is a King from the Davidic line.

Many years earlier driven out by his usurping son Absolom, King David fled out of the east gate of Jerusalem in tears and bare feet hiking up the rather steep Mount of Olives. At the top David is then given two donkeys to ride into exile (2 Samuel 15-16).

While David left in tears on two donkeys, Jesus and his followers return with two donkeys coming down the steep Mount of Olives with shouts of rejoicing at the reestablishment of David’s Kingdom. Third, by riding on a donkey Jesus shows his humility. Often kings would enter a vanquished city on a grand war horse as most likely David did when he first took Jerusalem from the Jebusites (2Samuel 5:6-10). Jesus indeed retains the humility of the exiled David even when he retakes Jerusalem.

King Jesus’ throne is not in a grand comfortable palace but on the cross
with a plate placed there by Pilate that reads for all to see in Latin, Greek and Hebrew: “Jesus of Nazareth King of the Jews.” It is by the cross and his humble surrender to the Father that Jesus conquers not only Jerusalem but sin and death itself and so draws all people to himself as a King.
Fourth, by coming into Jerusalem on a donkey Jesus, for the first time, publicly proclaims that he is indeed the Messiah. His followers, with great rejoicing proclaim his kingship and his salvation by crying “Hosanna to the Son of David.” They show their submission and loving welcome to their King by cutting branches from the trees and laying and their garments on the ground before the path Jesus. These branches were most likely of olive trees or date palm trees since Judea was famous for its delicious dates and palms were a symbol of King David.

While this open declaration of Jesus as the Messiah on a donkey was an occasion of rejoicing for his Galilean followers it is at the same time a very disturbing event to the Jewish
authorities as well as their Roman overlords. Imagine a very large group coming to Zuni from
Acoma proclaiming they have the true governor of Zuni! I imagine Governor Panteah and the
Council would be rather annoyed. Instead of proclaiming Jesus as the Messiah the Jewish and
Roman authorities ask: who is this? They see him as a pretender king from the backwater town
of Nazareth of Galilee a place where no good thing comes and certainly not kings.
Yet, this Palm Sunday we are also deeply disturbed because a virus has taken our beloved
palms from our hands. How do we properly welcome our king?
On a Palm Sunday over 800 years ago St. Clare of Assisi gave her whole life to Jesus when
St. Francis cut her hair and receiving her into the Franciscans. Her hair fell to the ground out of
love for Jesus. Bereft of palms we have nothing but our ourselves to lay on the ground under the
feet of our Savior as we welcome him to come into our homes and be our king. As St. Andrew
of Crete says in the Office of Readings: “So let us spread before his feet, not garments or soulless
olive branches, which delight the eye for a few hours and then wither but ourselves, clothed in
his grace, or rather, clothed completely in him. We who have been baptized into Christ must
ourselves be the garments that we spread before him. …Let us present the conqueror of death,
not with mere branches of palms but with the real rewards of his victory. Let our souls take the
place of the welcoming branches as we join today in the children’s holy song: Blessed is he who
comes in the name of the Lord. Blessed in the king of Israel.”
And so this Palm Sunday to welcome Jesus we ourselves must be the palms that we lay
under the feet of our King who conquers death on the cross.